You are here: TheEd Home / Archives for Tzvika Kraus 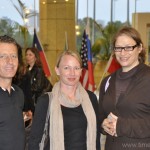 The Tel Aviv Marathon trip continued .. previous post Hotels and Onwards Just before 19h00, I scurried down to the lobby and immediately knew who Ms. Sharon Lewis was. Then I met Franziska Wauch, who is involved with a German tour company named, interAir. We were now waiting for the gent, who my taxi driver had told me (well, so I thought), was called Neil. It was no … END_OF_DOCUMENT_TOKEN_TO_BE_REPLACED