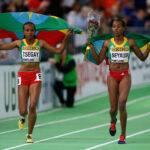 It was widely agreed that Kenya was fully capable of breaking the men’s 4x1500m world record at the IAAF World Relays but, unlike in the women’s event which had been relatively rarely run at international level before this year, most pundits stopped short of calling the men’s mark a certainty. They need not have been [...] News – The Kenyan Experience … END_OF_DOCUMENT_TOKEN_TO_BE_REPLACED