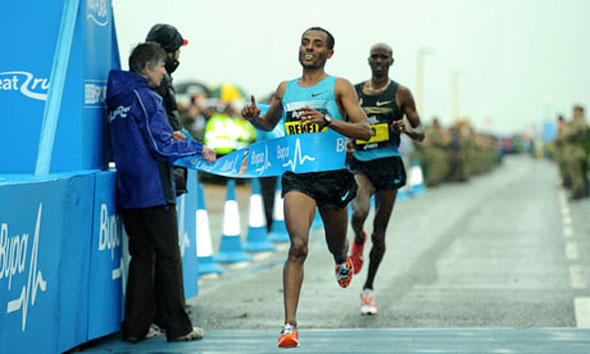 One thing came out of today’s GNR with Paula Radcliffe and her commentary, she is no doubt a great time-trialer but seemed to show she knows nothing about the tactical battles that take place at the top level amongst the men.

She kept mentioning that Mo Farah was doing the right thing by not covering Kenenisa Bekele’s break on the downhill, as the quadriceps would take a pounding.

By not going with Bekele, Farah lost the race. This was no loss to a sprint finish but a loss to an astute racing mind who has won many a world cross country title (11 to be sure).

The fact that Farah wanted to leave it to the last 600m showed that his conversion from a track athlete to road racer still needs a few circles.

Bekele had earlier made the tactical error of not going with his compatriot, Haile Gebrselassie and Farah, when they moved ahead in the early stages of the race and was able to rejoin them by running an even pace to catch them. You cannot do this on the roads, and if there were a few more Kenyans in the lead pack they would have hit the front and put an end to KB’s attempt to win.

Farah, should have taken the pace, because this looked like a well oiled Ethiopian win for the ‘motherland’, well done to the Emperor who at 40 can still roll out a 61 minute half