You are here: TheEd Home / Inspiration / The Hollywood Drive

Once in a while you come across the good salt of the earth runners, those who have a passion and love for the sport of running, and who want to share both their knowledge and enthusiasm. One such person is that ‘moustached fellow’ and friend, Owen Hollywood.

I had the exception of  meeting Owen on the island of Lanzarote where he had been living for 7 years, when we met at the Music Marathon in 2011.

This Irishman; has had the joy of living in South Africa for 20 years and this is where his running journey began, having run many a Comrades Marathon in KwaZulu Natal and the Two Oceans in Cape Town.

Because of this link to my home of birth, we were able to achieve an easy understanding of one another, something which I must admit many Europeans find difficult to achieve with me. Yes, South Africans are somewhat different, and we take pride in this difference, though I cannot say my last 16 years in Europe has been made any easier because of my personality, what can I say, such is the beast.

Now coming back to Doc Hollywood, well he was one of the founder members of the Lanzarote Road Runners club on the island in the Canaries. He attended practically every single club run on the Wednesday evening and Saturday mornings, where his enthusiasm and willingness to assist others in their running pursuits was always on hand.

Unfortunately, it was Owen’s last run last night, Wednesday the 20th March 2013, as he is off to Ireland to set-up house there, with a promise of returning to the island for some events towards the end of the year.

My family, TheDuck family, have got to know both Owen and his wonderful wife, Noreen, a great deal, and we spent the last Christmas and New Year’s Eve together. They were a major part of our family achieving stability on these volcanic shores.

I too, have benefitted from Owen’s enthusiasm for running, and had indeed started running (or waddling if you like) over the last 2 months, to a point where I was up to running 10km.

I have so enjoyed this fine man, that it led to me dedicating this post to him, I began my journey in running in 1982 and began coaching in 1984, during this time I have met a handful of super fine people, who to me contribute to the sport in their own compelling way, Owen Hollywood is one of these fine persons and I thank him for his friendship.

Here’s to the future and may we link up again in the not too distant future. 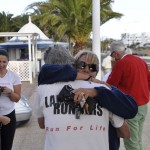 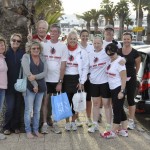 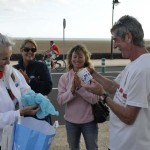