After the Copenhagen Marathon, MrsDuck prepared for a race through the streets of Ystad in the South of Sweden, some 60km from Malmo. The Wallanderloppet, is run over a distance of 6km and finishes at the town square. The race is normally held in July, and on this occasion the year was 2010.

This article follows on from – Intro to the athlete, MrsDuck. I have been given permission to document the development and training of MrsDuck, who is an ex-badminton player and in fact also my long suffering wife and mother of 3 children, in short she is a Supermom.

Ystad, is the home of the fictional character of Kurt Wallander. The detective, in the series of books written by crime writer, Henning Mankell. The books have been translated into a number of languages and have also been made into movies, with Kenneth Branagh playing the role of Wallander in the English versions.

With that said, MrsDuck ran this event hard. We had been able to put some sessions together with the intention of moving towards her first 10km, which would take place the end August. Immediately after the race, after having run 24:17, a remark was made to MrsDuck, that maybe she shouldn’t run so hard, if they didn’t want to be so tired afterwards.

The Trelleborg 10km came onto the horizon before one could say: ‘gotcha’. Till now MrsDuck had run the short distances and on each occasion she had performed admirably, well more than admirably for a newbie to the races. The 10km is a tough distance, it can catch you after 8km, and to run a good 10k takes practice and experience. MrsDuck was not prepared for what was to come.

The Race – leaving the stadium and blasting through the first 5km, MrsDuck was to came into strange territory after the 7km. This event was as hard as the Wallander 6km, but now she had to survive a further 4km to the finish. From 7km to 9km, MrsDuck came under tremendous pressure, though she was able to put it together over the last 1km to finish strongly. The last 2 to 300m training on the farm had been of value.

With that said, we now had to plot towards the next 10km.

Fortunately, from coaching experience, one learns that this is often a response to a 10km race and in particular a marathon, especially if the runner has given their all.

We now focused more on the 10km program for sub 40 minutes but revamped for MrsDuck’s needs.

We used the Ystad track for 2k and 1km session and the 5k circuit in the forest. 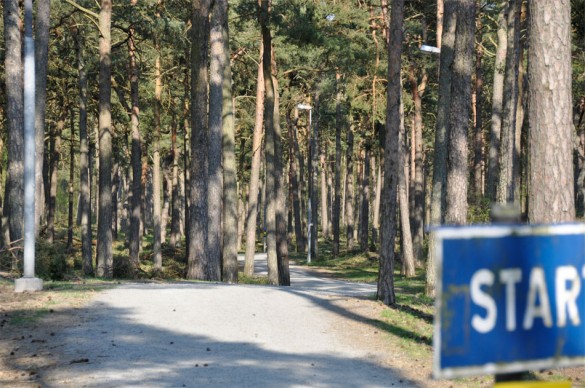 MrsDuck had run a number of 5km testers on the Sandskogen course in the past, in her build up to the first 10km and for this specific course, which is considered to be short (not sure of total length but if using the same course, you are able to measure improvement). Closing in towards the next 10km race, MrsDuck was able to post her fastest time for the 5km route, and this augured well for improving on her Trelleborg 10km result.

The race would be taking place locally and it was being hosted by the local Ystad Idrotts club. MrsDuck joined the club, as the event was also doubling as the District 10km Champs.

It was a 3 loop course with a climb on each loop, and we were able to go over the course in preparation.

On race day, I was on my ‘trusty blue steed‘, and I was able to see MrsDuck going through her paces which led to a new PB  (Personal Best) for 10km of 40:24. Good enough for 3rd place and a bronze medal for her efforts.

A more than suitable result and something positive for MrsDuck to build on for the future.

Lots more to follow: All change and a long haul to 2014