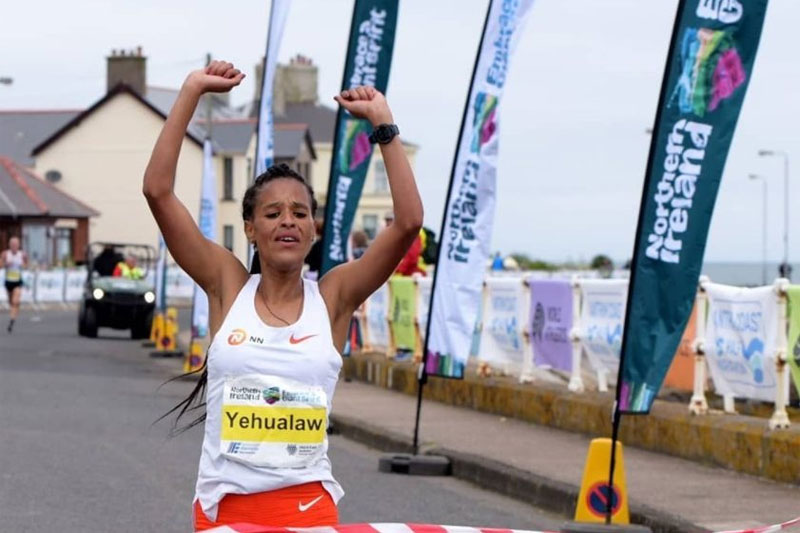 Larne, Northern Ireland – Less than five months after finishing second in Istanbul behind Ruth Chepngetich’s world record of 1:04:02, it was Yalemzerf Yehualaw’s turn to make history.

Running 1:03:44* at the Antrim Coast Half Marathon, a World Athletics Label Road Race, in Larne, Northern Ireland, on Sunday (29), the 22-year-old Ethiopian took 18 seconds off that world half marathon record set by Kenya’s world marathon champion Chepngetich on 4 April and her emotion at doing so was clear.

Yehualaw punched the air as she crossed the finish line and then the tears began to flow as she curled up on the ground and the magnitude of what she had just achieved began to sink in.

“It is a dream come true,” she told her NN Running Team. “Something I have worked for all my life.”

From making her international debut in 2019 to now being the only woman to have ever run under 64 minutes for the half marathon, it has been quite a journey for Yehualaw.

In Larne she was supported by pacemakers Roy Hoornweg and Mohamed Ali and the record looked on from the start. They reached 5km in 15:05 and 10km in 30:22 before 15km was passed in 45:24, with Yehualaw still looking comfortable.

Her intent was obvious and she continued to push the pace, with the world record in her sights.

“I was frustrated after not getting it (the world record) in Istanbul,” Yehualaw added, “but I am extremely happy now!”

*Subject to the usual ratification procedure