You are here: TheEd Home / Chat / Intro to the athlete AB 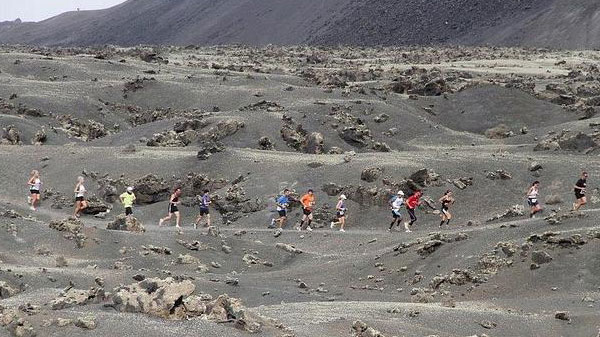 The end April this year; 2013, I approached a local athlete on the island of Lanzarote (and it is with her permission that I am writing this blog) with the intention of training her. One of the main ideas behind this, was that I knew my wife would be needing a training partner in the future.

AB at the time, had participated in the local Volcano Triathlon and was somewhat disappointed in her event that she had only managed her 10k run in 51:07, at the end of the Tri. Please note; that after a few decades of coaching, I do consider myself to have an eye for ability and when I approached her, I knew there was a great amount that could be transformed.

She stated that she had entered the Wine Run 21km on the 23rd June and wanted to run that. I didn’t have that much time to get AB to truly believe that she was indeed a runner and that the only problem was that she had never thought she could run faster before.

AB was pointed towards the sub 50 minute 10km Training Program and we had begun.

The first 3 x 2k session AB rolled out at 4.55 per k and this was not considered that easy.

Belief and self-belief, are massive components in an athlete transforming and running faster; the willingness to do the work and accept what comes with it are imperative.

I knew that AB could run sub 50 minutes off the training she had done for the Triathlon, and all that was needed to be done, was for us to arrange a time-trial along the route of the local Lanza Road Runners club run. Boom, AB churned out a 47:48 (we were grateful to the assistance of 2 pacesetters) on the 25th May.

We were on our way in her development.

Two weeks later and after having done a little bit more on the program with not much mileage, AB needed to run a 5k time-trial. By this time, my wife had joined AB, but did not have much training under her belt. On the 8th of June, AB ran 22:18, having picked up the pace over the last 1.5km. After this run, AB stated that she could not run any faster, that she was shattered. I replied that this would be the pace she would run for 10km come the end of summer.

I was given a look that I may be mad.

It must be noted, that the session AB had done during the week, 6 x 1k, was only at 4.40 per k. So sub 4.30 per k for AB was certainly due to her natural ability, and we had a fair amount of work to do, if we were to get a sub 45 minute come the end of summer.

Maybe, I was indeed mad.

On the 15th June; AB, the wife and myself rolled out a 54 minute 10km and this was a week before the wine run 21km. I did not want to place any pressure on AB and told her to go and enjoy. Of course, the athlete’s self-belief and in her mind, the lack of training for the distance worried her. I mentioned that all would be OK.

Even if AB was training on the sub 50 minute schedule, my job at hand was to convince the athlete they could indeed run.

And run they could, on July 6th, AB popped out a 21:30 5k time-trial. She finished shattered, in the same state as when she ran 22:18, and I obliged by saying that next time out she would run sub 21 minutes.

We were hoping there was more to come.

more to follow, as this has all taken place in the past