You are here: TheEd Home / Chat / The making of the athlete AB 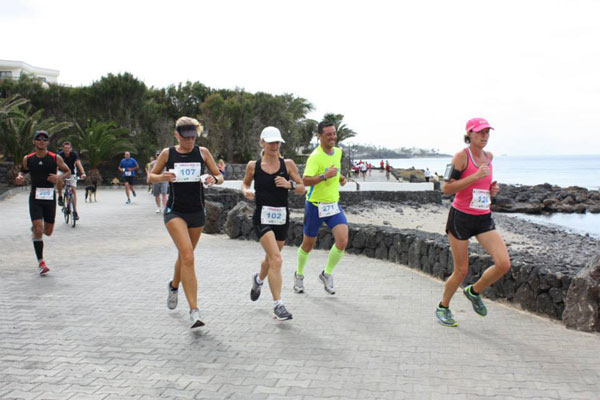 After the 5km time-trial, the week before, we now prepared towards the 10km which would take place on the 20th July in Playa Blanca.

This article follows on from – Intro to the athlete AB. I have been given permission to write a warts and all blog about the ups and down of the athlete AB, as they come to terms with the fact that they can indeed run.

The only problem we had with the 10km race, was that it was not going to be an exact 10km, ho hum. However, it would be a chance for the athlete to race, and an opportunity to see how much progress there had been.

On the Saturday of the 13th July, the lasses ran a controlled 6km paced run. The first 5km at 4.30 per k pace and then the pace was increased over the final 1km. This mission was accomplished and now all we had to do was roll down towards the event.

In the final days both MrsDuck and AB enjoyed the easy week 3 of the 10km program and relished in the 6 x 1 minute fast / slow session on the Thursday.

This session has been used by me in the last 2 decades (or more) with great effect, you shouldn’t be able to do much wrong with such a session, that is if the 1 minute fast is at projected race pace for the Saturday. There is meant to be a psychological gain, a feel good factor. If you go too hard, you defeating the objective.

Come Saturday, we were greeted with a not altogether well-presented event ( however the after event doings made up for it 😉 ) The course was along a tourist congested walkway and it made for some rather frustrating running.

In the race itself, MrsDuck moved away from AB at the turn-point and unfortunately AB had a moment in which she lacked self-belief and failed to go forward with her training partner. More about this shortly.

Whereas the run itself, when taking the overall pace off the GPS watch equated to 4.40 per k for a 10km of 46:40, the lack of self-belief during the race needed to be discussed.

The athlete had again run her fastest 10km, however she had maybe not performed as well as she could on the day, and this was something we would have to rectify over time.

The notion of self-belief

In the almost 3 decades of coaching involvement, the mental aspect involving the lack of self-belief is common and in the past I have spent many a moment discussing the need for the athlete to believe in their ability and to transform their training into performance. Despite what the athlete may think, their situation (and at times injury) is not unique, everything can be fixed, sometimes it just takes longer than expected, but persevere we must.

We train to race after-all.

In coaching, it is always fun when you are able to work with talented athletes, and whereas I have worked with athletes who have raced internationally and who have run more than decent times, most athletes do not realise that they are all similar when it comes to ‘mental fragility’ and the belief in one’s own ability.

Despite AB’s age, and at times the inability to comprehend that they are indeed a talented individual, it is somewhat unfortunate that they had not been identified as the making of a decent athlete some 20 years ago, as I truthfully believe that over the months the transition that will take place shall be enormous.

The only annoying aspect, is that there are not many accurately marked races to monitor progress, so we have to do our own paced runs and time-trials.

Somewhat sad for an island, that has produced an Olympic Marathon athlete who went to London 2012, you would have thought they would have used the initiative to build upon, however this does not seem the case, though credit to the Olympian athlete who did launch a 10k race of his own this year.

Now returning to AB, a conversation was had where the word FOCUS was mentioned. Focus allows for the athlete to maintain pace as well as the effort needed, stumble in this department and there is indeed a slowdown.

Despite mentioning  this, we were still making tremendous improvement.

The following week, we returned to the 4 x 2k session on the Thursday and on this occasion we were creeping closer towards 4.25 per k and slightly faster.

What must be noted, is that the primary aim has been to get the athlete to believe they can indeed run fast. During this period, you cannot apply a fixed program to achieve this but instead we have used the framework of 10k programs, which the athlete will train more intensively on, in the future. For now, we allow for the ‘straying away’ from the program, according to the athlete’s development needs.

In establishing markers towards the future training, the intention would be to use a 1k and 2k marked route, which you would use for your sessions. Up and until now, AB had been using her GPS and this had been serving its purpose.

Big things happened on the Tuesday during the 6 x 1k session. The athletes had warmed up and had started their session towards Matagorda from the Hawaiian Bar. On the 3rd 1k on the measured km, the pace started dropping towards 4 minutes per k and on the 4th repetition they ‘popped out’ a sub 4 minute kilometer. I was immensely pleased, and had to make the decision to continue at a pace closer to 4 minutes per k. AB the athlete, became concerned that she was running at such a fast pace. For an athlete who had never truly extended herself previously, the fact that she was running so quickly because of her natural ability, was immensely difficult to process.

On the 5th 1km, AB sat down on the pavement, and MrsDuck continued with me on the bicycle with her. We returned to fetch AB, and she was quite upset with herself for throwing in the towel. As is my expression; “I have seen it all before“, I mentioned to her that she should complete the last 1km. This she attempted to do, and now that we were making our way back to the marker of the bar, she somehow incorrectly read that she had 700m to go, whereas she had less than 200m. Yet again, she stopped. However, I had been alongside her and could note that the body was fine, the form was excellent, it was to do with the ‘incorrectly’ built-in ceiling, related to the ability to run fast.

One of the breakthroughs an athlete has to do in order to run faster, is to let go of all fears. One fear is related to breathing, in AB’s case it was more that she had to let the control of the breathing go (move out of her comfort zone) and to learn how to rhythm breath in conjunction with her running. This I was sure, would come as we developed.

After having the lack of self-belief in the 10km and now the towel being thrown in during the 1km session, I had to make a ‘call’ to go for the sub 21 minute the coming Saturday.

The weather swung round and the following days were windy, so we made the decision to drive to Playa Honda and to run 5km back with the wind behind us, instead of hitting our heads against the wind.

Come Saturday, we jumped into the time-trial, got below pace for the first 1km and then focused on running at sub 21 minute pace for the next 3km and looking to finish strongly on the last 1km. On the course, from 3k to 2k to go, there is a slight incline and this was the only km where the pace dipped slightly.

We had achieved the sub 21 minute, and whereas some would say that there was a wind behind; that was not in question, the fact that the legs could turnover at that speed for a pace of 4.08 per k overall was what counted.

Mission accomplished and the plan of sub 45 minutes before the end of summer was back on.

The next article is the series – Breaks, Plans and ABnating